For most of Carlos Ruiz Zafon's novel "The Angel's Game" (Anchor, 531 pp., $15.95 paper), you feel like you might just have a masterpiece in your hands.
Then it all comes apart. It begins to seem a little too outrageous, a bit too farfetched. The ending doesn't equal the beginning or most of what comes in between.
Still, it's fun while it lasts. The story is told by David Martin, a gifted writer in Barcelona whose talents have been wasted on pulp novels. Then a mysterious businessman from Paris named Andreas Corelli offers him an incredible amount of money to write a holy text for a new religion -- the details of which don't really matter.
At first it seems like easy money. Gradually Martin comes to realize that he has, quite literally, sold his soul to the devil.

Click to read the full article
Posted at 3:03 PM No comments:

Javier Marías: Bad Nature, or With Elvis in Mexico


One of Spain’s leading writers, Javier Marías, undertakes quite a flight of the imagination in this skinny little novel—technically a long story or novella—Bad Nature, or With Elvis in Mexico. The fact is that Elvis Presley was never in Acapulco—or at least not during the filming of Fun in Acapulco (1963), his thirteenth film, late in his movie career, and totally formulaic (unless you want to cite the presence of Ursula Andress as providing gravitas to the film). The movie was shot in Hollywood, though obviously some exterior scenes were taken on the assumed location.
What Marías has undertaken is a broad re-envision of what might have happened to Elvis had the film been made in Mexico. The narrative is comparable to, say, Philip Roth’s The Plot against America

, which speculates what might have happened to the United States if Franklin Delano Roosevelt had not won reelection in 1940. Obviously, Marías’s scope is nothing of the magnitude of Roth’s speculation of an alternate history for that presidential election. But that hardly matters, since Marías’s narrative is just as profound as Roth’s when the issue becomes societal differences: popular culture and cultural narrow-mindedness.

Click to read the full article
Posted at 4:47 PM No comments: 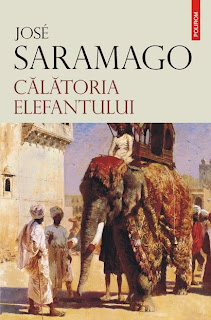 The Romanian edition of José Saramago's The Elephant's Journey


Little is quite as dull as literary worship; this essay on Borges is thus happily doomed. One finds oneself tempted toward learned-sounding inadequacies like: His work combines the elegance of mathematical proof with the emotionally profound wit of Dostoyevsky. Or: He courts paradox so primrosely, describing his Dupin-like detective character as having “reckless perspicacity” and the light in his infinite Library of Babel as being “insufficient, and unceasing.” But see, such worship is pale.
And problematic as well. More than any other 20th-century figure, Borges is the one designated — and often dismissed as — the Platonic ideal of Writer. His outrageous intellect is cited as proof of either his genius or of his bloodless cerebralism.
But Borges did have some mortal qualities. He lived most of his life with his mother. He loved detective and adventure novels. (His first story in English was published in Ellery Queen Mystery Magazine.) Though he started to go blind in his 30s, he never learned to read Braille. And in his later years he made some unappealing political remarks about being happy that, following the military overthrow of the Perón government, “gentlemen” were again running the country. (Perón, to be fair, had “promoted” Borges from head of the National Library to head of poultry inspection.) Such remarks are perhaps why he never won the Nobel.

Click to read the full article
Posted at 4:40 PM No comments:


The She-Devil in the Mirror

from Salvadoran novelist Horacio Castellanos Moya is one of the choices in John O'Connell thriller review roundup.


An intriguing, nuanced thriller set in San Salvador in the early 1990s after the end of the civil war, this was originally published there 10 years ago. Our narrator is a wealthy 30-year-old divorcee, Laura Rivera, whose best friend Olga Maria has just been murdered. In a series of gossipy, increasingly manic rants delivered over a six-week period in a variety of settings – at a wake; on the phone; driving to the cemetery for Olga Maria's funeral – Laura floats her theories and quickly proves herself to be as devious as she is paranoid. The identity of her addressee remains a mystery throughout. It certainly isn't the reader: we're eavesdropping on these monologues, a fact that both tantalises and implicates us. Silver's fine translation sustains tension admirably, though I wondered if Laura was even more objectionable (because easier to locate socially) in the original Spanish.

Click to read the full article
Posted at 4:31 PM No comments:

Help us by shopping at Amazon